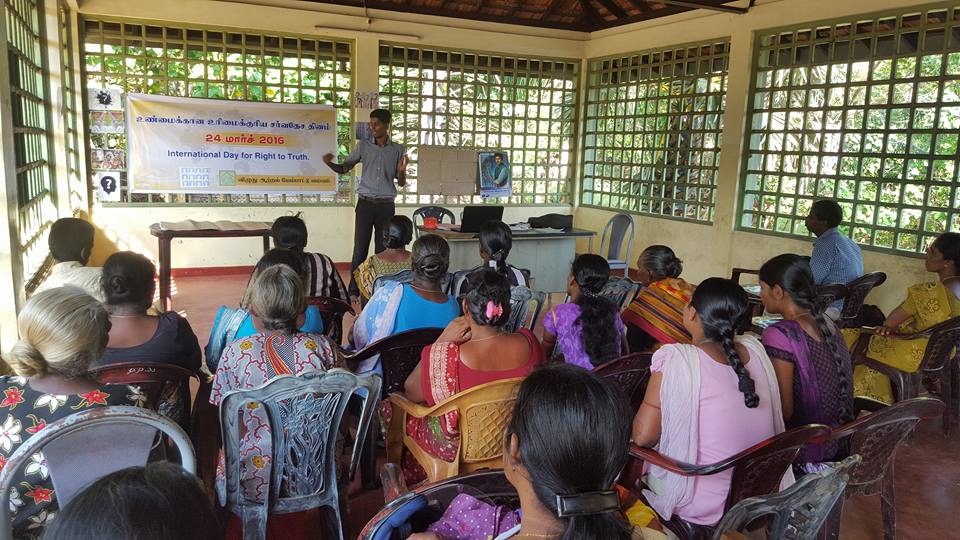 Commemorating The International Right to Truth day Viluthu strengthens women headed households by Commemorating International Right to Truth day in its project locations. Viluthu has organized and held meetings at Vallipunam, in the Mullaitivu district, Thambalakamam in Palai in the Kilinochchi District, Aandankulam in Manthai West in the Mannar District and at the Viluthu […]

Viluthu with the collaboration of few organizations in the south has organized a campaign titled “No Run Tell’ to create awareness on violence against children and to protect them from all forms of abuse. Viluthu has fully supported the promotion of this “No Run Tell” campaign in all its project locations in the different districts. […]

The economic and social issues faced by women headed households (WHH) as a result of the 30 year long war in Sri    Lanka have been at the forefront of most rehabilitation programmes during the war and post-war period. It is estimated that there are over 90,000 WHH in the North and East alone. Women headed households in Sri Lanka […]

Post War
Herstories’ of Resilience and Hope
February 10, 2016 By admin

Mother’s are guardians of their family history. They are the guardians of memory. They are the pillars of strength upon which a family is built.  This archival project is the first of a series of people’s histories that focuses on mothers from the South and North that highlight their strength in the face of adversity, and their hopes […]

Lack of employment opportunities has been identified as a primary issue concerning all the problems as faced by the Women headed households. The ‘Jaffna District Amara Forum’ of women headed households has been continuously requesting many of the Institutions and as well as the politicians to help them address this issue. They have even undertaken propaganda work on […]

During the latter part of 2013, Viluthu began a concerted drive to mobilize a volunteer base for itself. This proved to be extremely successful. In Jaffna district, “Samuthaaya Sangilihal” was formed by a group of Jaffna University students, which engaged in community work. This group began to visit villages in the peninsula, raising awareness on […]

Viluthu has begun a food and nutrition security project amongst the poor communities of Mutur east with the support of South Asian Food And Nutrition Security Initiative (SAFANSI) through the World Bank. From October 2013 a participatory process of food security assessment was conducted. The women leaders of the community and some of the women […]

Viluthu collaborated with “Shadows of Play” to conduct a series of theatre workshops and performances in the districts of Puttalam, Jaffna, Batticaloa and Galle during the months of February and March 2014. The objective of this project was to build capacities of rural youth in the art of theatre and communications. Ms Sulochana Dissanayake, the […]

Workshops
Training on Gender and Participation in Community Development
March 31, 2015 By admin

Viluthu has successfully completed a training programme on ‘Gender and Participation in Community Development’,  in the Jaffna district for 10 consecutive weekends, commencing from the 9th of August 2013. A total number of 32 male and female participants consisting of Govt. Officials, Staff members of NGOs, Undergraduates of University of Jaffna and Open University of […]